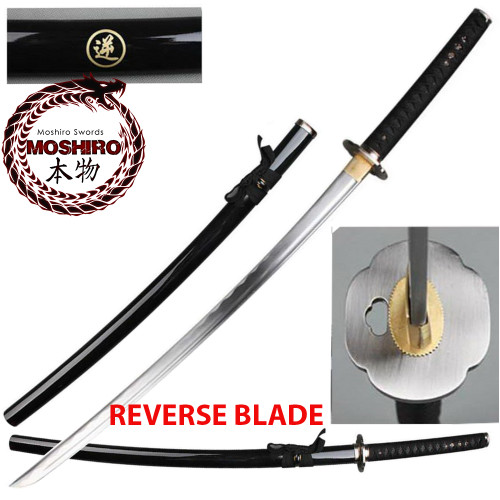 Before the Meiji Restoration, Himura Kenshin was known as Hitokiri (Murderer) Battousai. When the old government was overthrown and the fighting had drawn to an end, Hitokiri Battousai had disappeared. Kenshin wandered the countryside for nearly eleven years; the world presumed him dead or lost. When Kenshin returns, he is no longer Hitokiri Battousai, for he has sworn never to take another life again. His sword is not a regular sword, but a reverse-bladed sword, meaning that he cannot kill anyone with his sword, but he can defend himself. Kenshin is a man who is trying to escape his past, and create a future for himself.

You can now own a replica sword based on this great legend. Although this sword has a functional blade this is not practical to use. This sword was designed for the die hard fan for aesthetics in knowing that blade is sharp and able to cut. Rurouni Kenshin, a manga and anime series created by mangaka Nobuhiro Watsuki, is set during the early Meiji period in Japan. The English versions of the OVAs as well as the movie are sold under the Samurai X name.

39 inches overall from pommel to the tip of the blade.

The blade measures 28" inches in length.

The Handle is cord wrapped with steel fittings and a black hardwood scabbard.

You must be 18 years or older to purchase this sword